As usual, I was late getting my party inspiration juices stirred up for my son’s Medieval Times birthday invitation, so I ended up at the computer one very late night, googling “royal proclamations.”  I lucked out: the first entry I found (from 1723) was almost perfectly worded for my purpose.  A few modifications, and this is what I wrote:

Lawrence George 1, by the grace of God,

Knight of Castle (1234) Sanditon, and its backyard Commonwealth, defender of the faith and of our Church in earth the supreme head, to all our most loving and faithful friends and family, and also our mostly obedient pets, and to every of them, greeting:

Where it will please Almighty God, on Saturday next, the 18th November, to call together the afore-mentioned parties to join in the revelry, celebrations, and goings-on that attend the twelfth birthday dinner feast of the same Lawrence George 1, hereafter known as Sir Lance, at Castle Medieval Times of Buena Park, to witness in all the full glory, regalia, magnificence, etc. the tournament of jousting, swordplay, and horseplay that ensues. Carriage departs from Castle Sanditon at half after four o’clock in the afternoon of the same day. Return will be by same later in the evening.

I printed the text in a plummy-red color (using Word 2013 Blackadder font) on vellum, that I trimmed down to 7 1/2″ x 10″.  The next day, I got my son to sign all the vellum sheets and I added a wax seal of his initial to match the ink color.  Then I glue-pasted the printed vellum to a gold Venetian-marbled sheet, measuring 8 1/2″ x 11″.  (I had pre-printed the marbled paper with the crossed images of two letter openers that I borrowed from my son; I simply scanned one letter opener, then rotated a copy of the image on top of it.)

Then I folded the proclamation in thirds and wrapped it with a “ribbon” of plum-red velour paper trimmed to 3/8″ x 9 1/2″.  I glued a “jewel” to the end of the ribbon and affixed the tab with a glue dot (so it would be re-sealable). 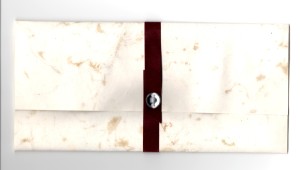 The folded proclamation fit inside a business-sized, buff-colored envelope – and off it went!