Many, many years ago, my dad went to Japan on a business trip. He made good friends there with another businessman, named Seiji. Seiji was newly engaged to Noriko, and when he had to come to the States for an extended stay, he brought his new wife, Noriko, with him. Not only that, but Seiji and Noriko stayed with my parents for several weeks until they got their bearings for life-American. I remember the seemingly meditative way Noriko arranged a few flowers and leaves from our garden in an ikebana vase she had brought with her from Japan.

Up until then, the only thing I knew about the Japanese culture I had learned in a black-and-white movie about Japan shown in my 3rd-grade class. Oh, and I had read Rumer Godden’s charming stories about the Japanese dolls who come to live with little English girls, Miss Happiness and Miss Flower, and Little Plum.  (I never did build the Japanese doll house from the plans included at the end of Miss Happiness and Miss Flower, but it’s on my Bucket List still.)

Anyway, our family friendship with Seiji and Noriko was further solidified when my mom and I visited Japan as part of a tour with my sister-in-law-to-be, who was on a quest for bridesmaids’ fabric – but that’s another story.  My mom and I visited Seiji and Noriko in their home outside Tokyo, after Seiji had commuted into Tokyo two hours to pick us up at our hotel and escort us back to his home (four hours round trip)…  The tatami mats, the tokonoma alcove, fresh sushi and sashimi for dinner, and all the electric gizmos attached to their television set that allowed their two young boys, Hiroki and Wataru, to compose music on their computer/keyboard/ television screen (just for fun, of course) gave us a taste of Japanese culture shock.

Fast forward a few years, and Noriko and Wataru came to visit me and my family while they toured California college campuses for Wataru. After that, we were often surprised by special gifts from Noriko. Once it was a golden soccer ball named “Lance” from the World Cup that had been held in Japan, sometimes it was school supplies just right for little hands, or travel guides from Kyoto or Mt. Fuji (as if I needed tempting).

So, one summer after Noriko and Wataru’s visit, we decided to have a Japan Party just for fun. I admit, it was probably more my idea than my kids’, but I had this notion that it would be good for them to experience other cultures, even if it was only at home. My son had learned how to fold samurai origami hats from his third-grade teacher, and I had gone crazy buying tropically-inspired origami paper on a recent trip to Hawaii, so I decided to put the two random events together and come up with an invitation.

We went to our local library and checked out a few books on Japan and Japanese culture, including cookbooks. We shopped our local Marukai store and came home with craft supplies, one-dollar-each Japanese-style tea cups, and loads of edible delicacies. And then the day of our party came.

I laid out woven beach mats (purchased on sale at an ABC store in Lahaina) on the floor for our tatami mats. I borrowed some bricks – stored in the garage for some unknown reason – from my husband for table “legs.” I laid a folding table on top of the bricks without extending the legs; that gave me a low table at which the kids could kneel. Noriko had sent me a beautiful tablecloth that I used. Party City had some Asian-inspired plates. I added the tea cups that we had bought, and chopsticks that the kids had rolled in napkins, an orchid from Trader Joe’s for a centerpiece, and our table was set. 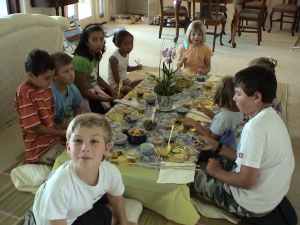 From the library cookbooks and Marukai supplies, it was easy to plan the menu.  My daughter got inspired and drew her own kimono, so I used that to set off our menu.

It was also easy to plan the crafts that, of course, the kids would want to do. Well, at least I would want to do… The kids were good sports and went along with me: life-size origami samurai hats, kimono-girl book marks,

fish pennants to hang outside on Children’s Day (May 5)…

and then they got to play, so it was all good.

Many years later, my daughter visited Noriko and Seiji in their Tokyo home.  I like to think it wasn’t all foreign to her…