My son’s birthday is in November, but the year he turned eight, he asked to celebrate early with a Halloween party in October.  He also wanted a small party that would include sibling friends for his younger sister.  Could a mom ask for anything more?  So, the guest list was easy:  7 friends for my son, and 7 of their siblings for my daughter.  We set the party for the afternoon of October 30th – right after school let out for the minimum day.

The invitations were fun; we had visited Boston the summer before, strolled around lots of old cemeteries, and so were very familiar with headstones.  It was easy to get inspiration from those.

Some cute stickers (chosen by my son who decided against anything too scary – not wanting to intimidate the younger siblings… or himself?), cute Halloween spider-web paper, and a do-it-myself pop-up ghost to spook the reader when opening the card, and the invitation was done.

Next, came the planning.  I have a partner-in-party-planning-crime in a close friend who is a former kindergarten teacher; she is known for being artsy-crafty.  We had a lot of fun and good times pulling this party off.

We started the party in our library – decorated like a haunted house.  Martha Stewart’s Holiday Halloween 2000 issue came in handy: we darkened all the windows with Hefty black trash bags (cut-to-fit), and added a few construction paper silhouettes for added drama.  We draped the furniture with old white sheets and cheesecloth for that un-lived-in look, stretched spider webs everywhere, and camouflaged a left-over helium hula dancer balloon with cheesecloth layers (after lightly weighting her head and feet to make her float horizontally above the settee).  Blank spaces in our library shelves were filled with a clear cookie jar holding a fennel bulb suspended in red-tinted water (heart specimen, of course) and a trifle bowl holding a loose-leafed cabbage in green tinted water (a brain in swamp water).  Our specimens were backlit with small flashlights making them look almost creepy.

Our game table in the corner held a feast for ghostly visitors and any other party guests who wanted to guess what the food stuffs were: peeled grapes (eyeballs), grape and sour cream Jell-O mold in the shape of a brain, ladies’ fingers (made from Pillsbury bread stick dough and almond “fingernails”), meringue bones, cold chopped tofu (intestines), cold cooked long macaroni noodles (blood vessels), and a glow-in-the-dark skeleton – suspended above a witch’s cauldron – stirring a brew of dry ice and water, illuminated with a flashing red bicycle light. 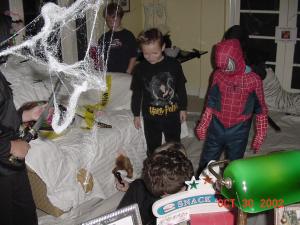 Crafts and activities followed in our backyard with two tables set up for work stations.  First, they made ghost figures: cheesecloth draped over paper towel rolls with bent hanger arms and a crumpled foil ball for a head, and saturated with liquid starch.  This took some time to dry so it was our first craft activity. At the second table, they made spiders, some like the one we had made for the haunted library, and smaller spiders out of different-sized wooden beads threaded onto black pipe cleaners. 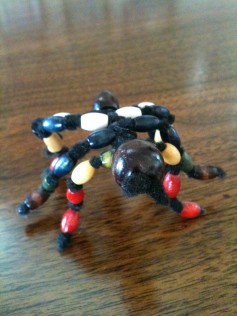 And, of course, the kids bobbed for apples, suspended on a string from a shower rod temporarily in place on our verandah.  And when the apples were done, they took their swipes at a skeleton piñata. 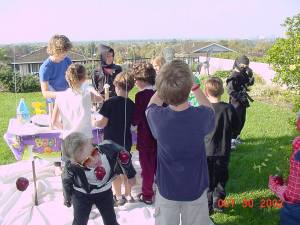 Lots of running around the backyard gave all of them an appetite, and we were ready for that, too:  Ghost shakes were made out of vanilla milk shake poured into clear plastic cups whose rims had been dipped in red-tinted corn syrup, more pretzel ladies’ fingers, meringue bones, caramel apples (made with store-bought microwave-able caramel sauce and a variety of toppings to customize their apples), and the pumpkin-shaped birthday cake: two chocolate Bundt cakes sandwiched together with orange icing, topped with a green-frosted cupcake stem, and lit up with the appropriate number of RIP candles. 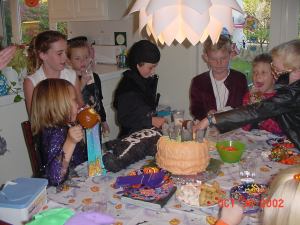 All that carbohydrate intake required some calming down, and we were ready for that, too.  We gathered the guests into our living room to open presents, and then we brought out the books.  The two books I read aloud were old favorites in our family, and our party guests enjoyed them, too.  The Ghost-Eye Tree, by Bill Martin, Jr. and John Archambault,  and The Ghost of Nicholas Greebe, by Tony Johnston, are classics still. 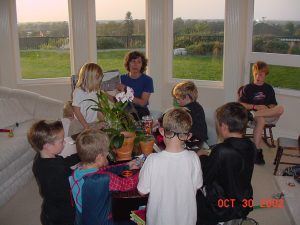 Finally, the children went home with party favors: the crafts they’d made, a Halloween mug, some goodies from the snack table, a creepy pincher hand, and a glow stick to wear for trick-or-treating the next night. And we stayed home with great memories.  The party was such a hit with my son that he asked then and there to repeat the theme the next year – but that’s another party…